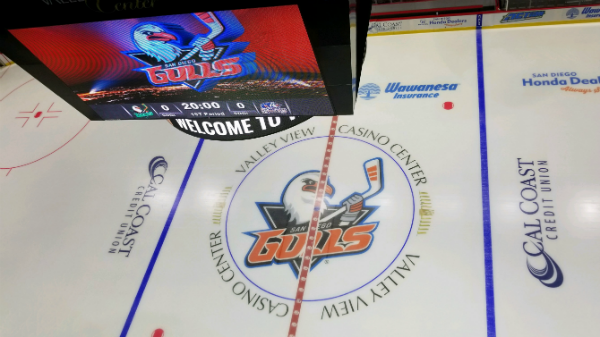 Just look at those colors!!!

In March, 2018, Pechanga Arena San Diego in San Diego, CA, installed a REALice water treatment system at their ice resurfacing fill station. While many of our customers are looking to reduce their annual energy spend by going to REALice to use cold water to resurface their ice, others install it because of the consistent quality ice that REALice delivers. That’s how it was for this venue, an event/hockey facility wanting a better ice product than what they had been producing. What they got was even better than expected.

“The clarity is way better than advertised,” insists Ralph Bedoe, Chief Engineer at the 52-year-old arena, owned by AEG Worldwide and home to the San Diego Gulls of the American Hockey League. “I can’t wait to see what it will look like on the next televised game. I am very happy with the ice.”

Bedoe sent us the above picture of the ice to prove his statement — but as everyone knows, brand new ice looks fantastic.

“That’s not new ice,” Bedoe insists. “That’s the ice after several games and events. And it looks brand new!”

We hear stories like this all the time — especially when an arena has taken the time to use REALice-treated water to build the ice up from scratch, which Bedoe had his team do.

“We used REALice-treated water for the ice, for mixing the ice paint too, and we are thrilled with it. Look how those colors pop!”

We know that going to REALice’s cold water resurfacing technology goes against what many ice makers believe when it comes to making ice. REALice’s patented 3D-printed system is a brilliant example of fluid dynamics, using the water pressure at your arena to remove the micro air bubbles that are trapped in the water. With REALice, you’ll be left with a clear, dense, durable ice that scars less and, when it does, repairs quicker.

And it will save on energy too.

Want to know more? Send an email to support@realice.us and we’ll be happy to give you an idea of what you can expect with REALice at your arena.