How REALice Can Slash Your Compressors’ Run Time 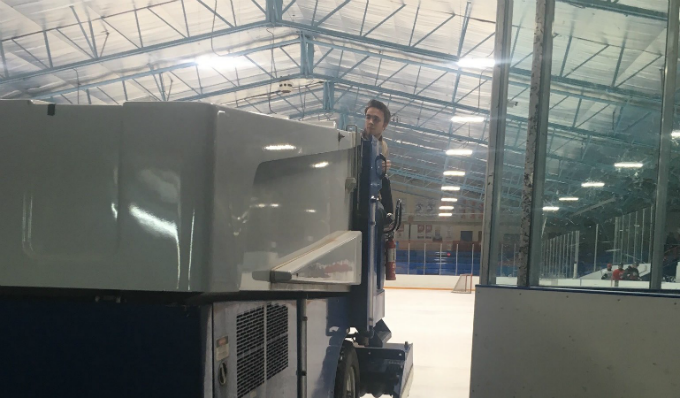 02 Jun How REALice Can Slash Your Compressors’ Run Time

The way Larry Woodley tells it, when he gets phone calls from other arena managers asking about the REALice installation at his arena, he tells them about the lower energy use and how he’s running his set point higher than ever before. But Woodley, the arena manager at Toronto’s George Bell Arena, a busy year-round single pad facility, says that what really makes them interested in his REALice story is when he tells them about the reduced run time on his compressors.

That’s because their run time hasn’t just been reduced. They’ve been slashed.

Using REALice — and being able to use cold water to resurface the ice — means you don’t have to heat the water anymore. This savings is usually natural gas usage, but it can be electricity or oil too. By not heating your resurfacing water up to 140°F (or often higher) and using cold, or colder water (especially if you’re using reclaim heat), the energy you need is so much less than what you needed before. In fact, some of our customers have removed — or completely isolated — their boilers.

And because the REALice-treated water is denser with fewer micro air bubbles in it than regular water, it freezes faster. That’s why you’ll need to move your set point higher and that’s where the biggest energy savings are. Chilling that big, flat surface requires a lot of energy, but the warmer the surface is, the less refrigeration is needed.

And that’s where the run time savings come in.

George Bell’s compressors run about half as much with REALice

REALice was installed at the George Bell in December, 2016. Woodley, who’s been at the helm of this arena for the past dozen of facility’s 55 years, noticed how much his compressors weren’t running right away.

“I’d walk into the building and I couldn’t hear them. They weren’t running,” he explains. “The arena was quiet.”

“My compressors are barely running anymore,” he says.

“I can confidently say that my compressor run time has been cut in half,” he says. Woodley’s operations team averages 10 resurfacings a day. Since he started tracking the run hours in February, his two 60 hp compressors are averaging 9.7 and 9.3 hours a day respectively over the past 119 days.

REALice is the easiest way to reduce your facility’s energy spend, your compressors’ run time and it will help you reduce your carbon emissions too. So what’s stopping you? Like Larry Woodley and his team, you’ll still be able to make great ice. All you’re removing is the “hot” from the “hot water” equation — and those pesky micro air bubbles that create fragile ice.

Plug your numbers into the Savings Calculator on our website to see what resurfacing with REALice’s cold water resurfacing technology will mean to your arena. Or send us an email or give us a call. REALice can make a big difference to your annual spend — and give you great quality ice too.  And it’s eligible for rebates from many utilities, too!

How do I get REALice into My Arena:

Find out how you can calculate your arena’s savings here. Or contact us by email at info@realice.ca and we’ll help put the numbers together for you.

Would you like to speak to one of our references first? No problem! Call any of our installations in North America and you will learn that not only are they saving money resurfacing their ice with cold water, but they’re making great ice too.

It’s time to switch to REALice’s cold water resurfacing technology. With high energy costs — and rebates available from many utilities — changing from hot to cold water ice resurfacing has never made more sense. To find out what REALice would mean to your facility, check out our Savings Calculator and see for yourself now.