Ice that’s the Talk of the Town 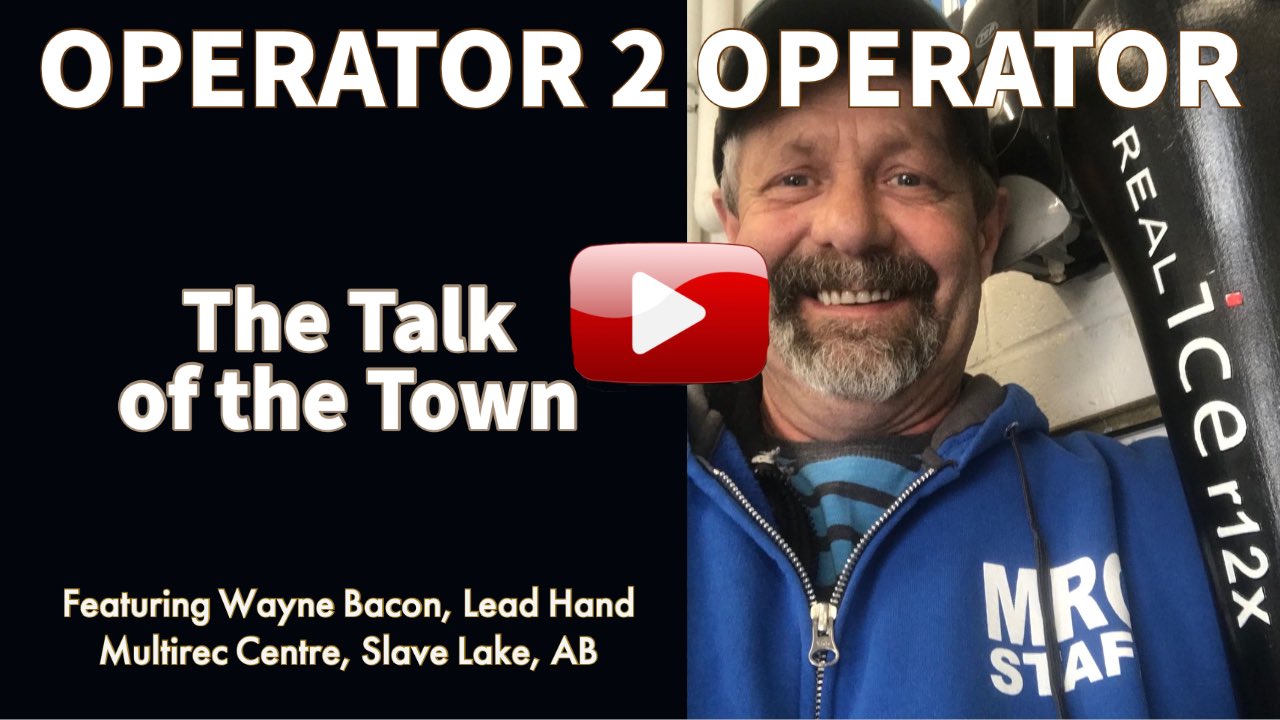 31 Jul Ice that’s the Talk of the Town

This story may be long, but we think it’s worth its length. It’s about a new customer using REALice and being amazed with the final product. (“We always had good ice before, but this, this ice, is EXCELLENT!!!“) And it’s about the BUZZ in town around the ice – buzz from the skaters, the parents and other stakeholders, including the Mayor. Hockey school started earlier this month and word got out fast that this new ice was something special. Everyone wants to skate on it – slots are now hard to find in the calendar. And even four weeks on, the ice looks just as nice as when the first user groups hit the ice on July 18th, 2022.

We’ve thrown in some videos and pictures, of course, to make you want to keep reading.

Or watch the 3-minute YouTube video here. Slave Lake’s Wayne Bacon talks about the best ice ever, the REALice difference he sees — including the lower run-time hours on his compressors — which he thinks is SICK!!!  That’s coming from an ice maker with 35 years of experience.

We Know. Change Can Be Scary.

Change can be scary for everyone. We know that you’ll have great results using our floodwater system instead of hot floodwater, but you will need to follow a few simple rules (like the static water pressure needs to be at least 45 PSI). These aren’t hard, and we’re always here to assist.

Wayne Bacon and his team did exactly that. They called with questions and told us what they were seeing.

Wayne’s official title, this time around, is Lead Hand. He’s been doing the ice in Slave Lake, AB for 35 years, — and the past four weeks of those have been with REALice-treated water. He’d retired (held the title of ‘Supervisor”) two years back, and was asked to come back this season. Slave Lake is about 3 hours north of Edmonton.

Wayne’s reappearance at the Multi Recreation Centre was a sigh of relief for many. Garry Roth, now the acting CAO for the Town of Slave Lake, had applied for and been awarded, a grant for their REALice purchase through the Municipal Climate Change Action Centre’s REC program, an Alberta program for municipalities to lower their energy spend and greenhouse gas emissions.

Although the REALice wall unit was installed in December of 2021, they only started using it, under Wayne’s supervision, for this season’s ice. They had existing ice, and had just shaved it down to build it back up using REALice-treated water.

Wayne called. He had some questions about the handheld nozzle that helps make up the REALice system, and wanted to know if he could use something other than the handheld to build up the ice.

That’s a common question that we hear, and yes, you can use a spray boom or Mark IV Ice Painter – just make sure you’re using water treated through the wall unit. Or… give the handheld a try. It really makes dense, clear, durable ice, in thin layers for a solid foundation.

That afternoon, Wayne sent through the first video.

“I’m really amazed at how glassy it looks,” he said. 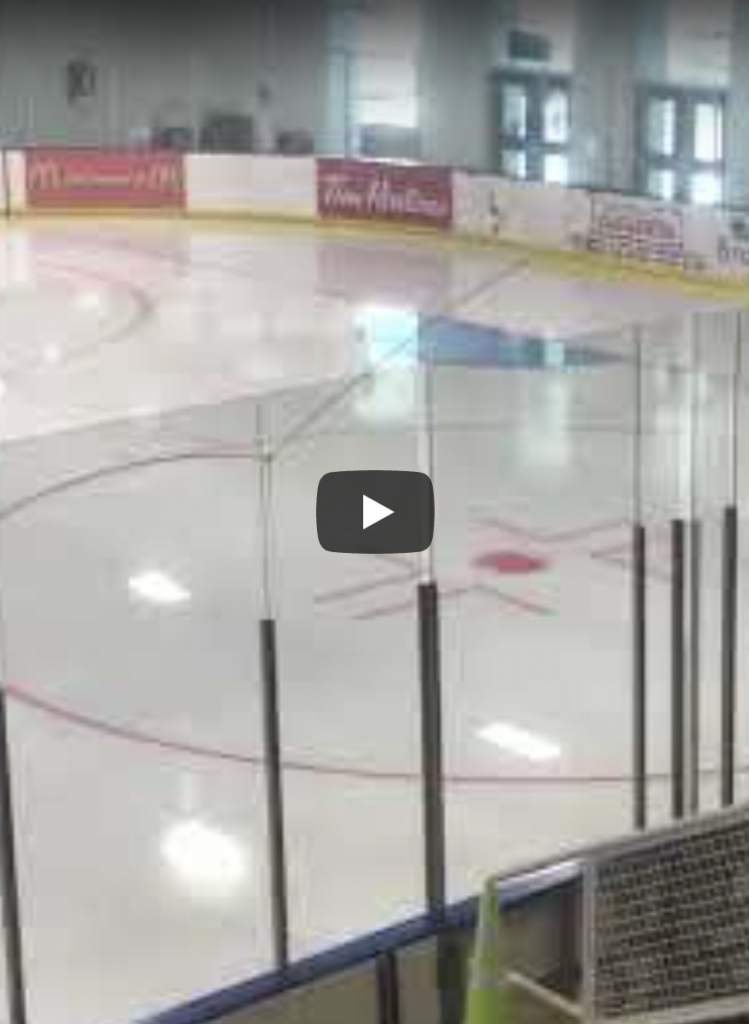 Early the next morning, he sent over the selfie you see above: “Day 2 with my new friend. I think we’re going to get along perfectly.”

By the end of that day, he sent a text saying he was very impressed. And this: an observation we’d never heard before.

“Some workers just came in to the arena and said it smells more like a pool now. It’s just a fresher-smelling water, I believe.”

Then he sent pictures from their webcam showing the old ice compared to the new ice. 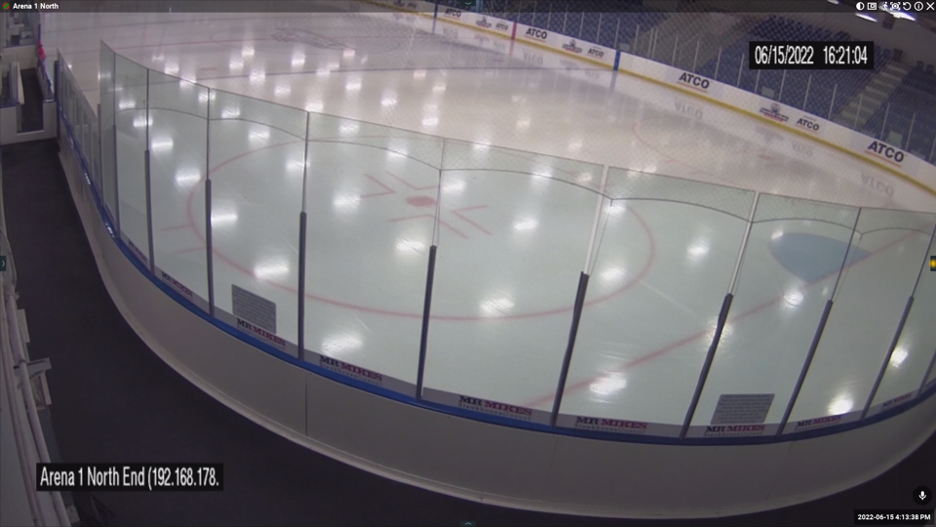 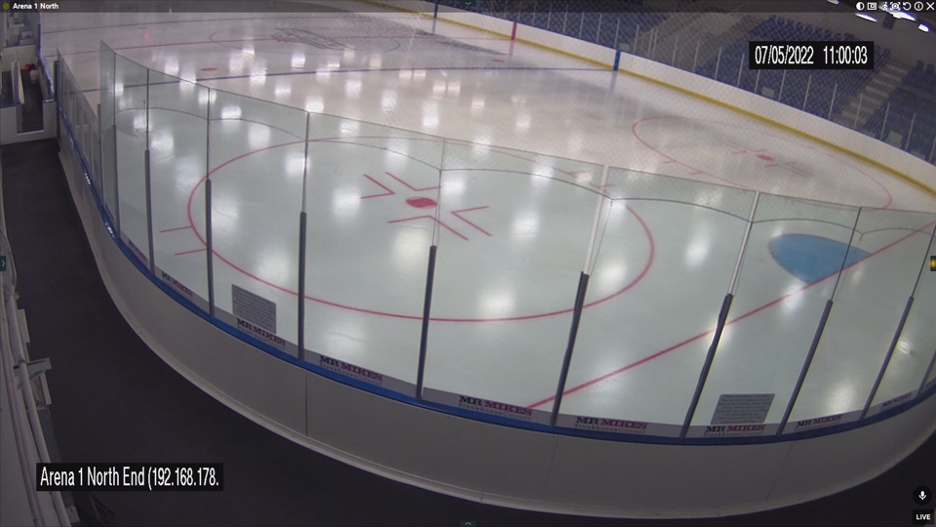 (We told him that, yes, it looks like night and day, but we’re tired of the nit-pickers who throw shade at us: new ice always looks good….so yes we see it, but don’t get too excited yet. Keep watching and let us know what else you see!)

Out came the ice resurfacing machine and they started laying down water with it.

“Love how it looks and freezing so nice. Way to go, REALice!” 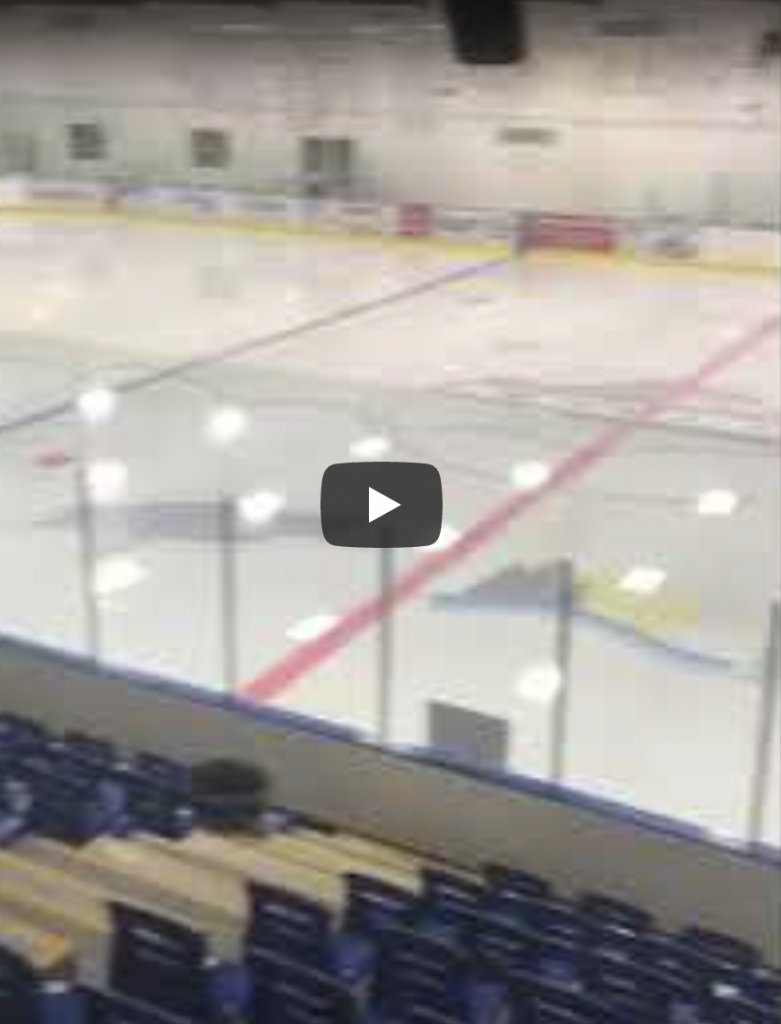 “I’m already noticing the difference in the ice shavings and how the snow is starting to turn to cotton candy.” 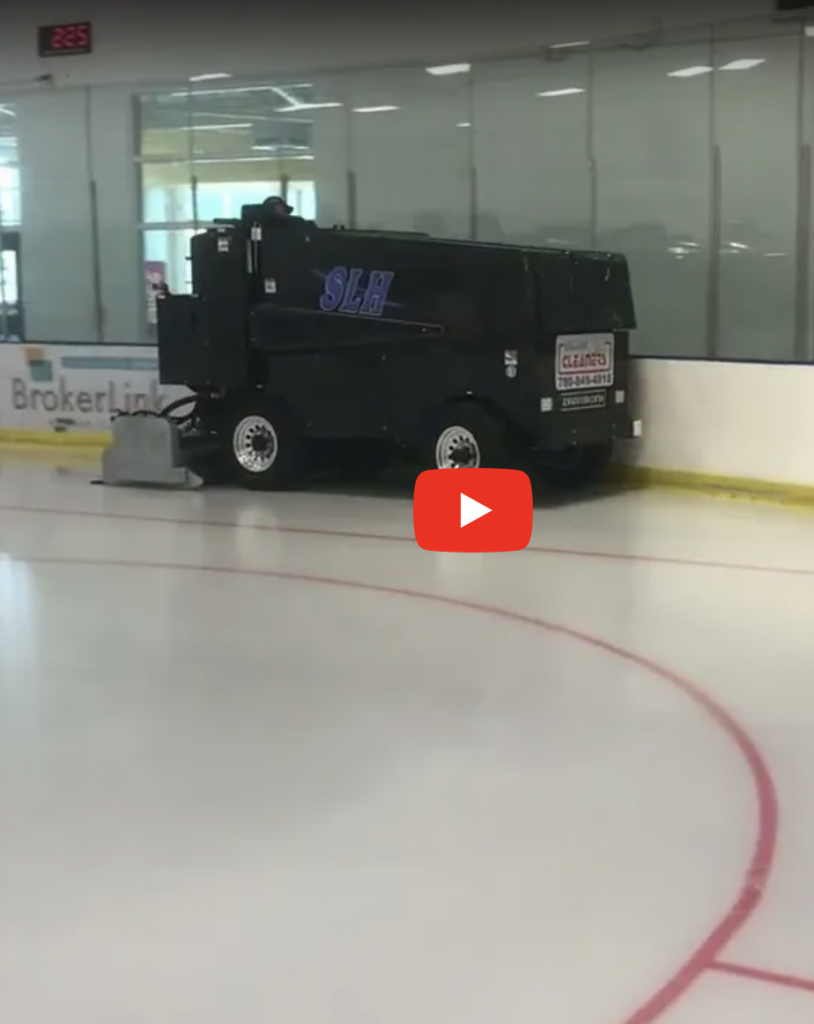 “Sad news. Started at 5 AM today and when entering my arena I came to a puddle of water. The compressors shut down Friday so my arena is now a pool. I have to redo the complete ice.” 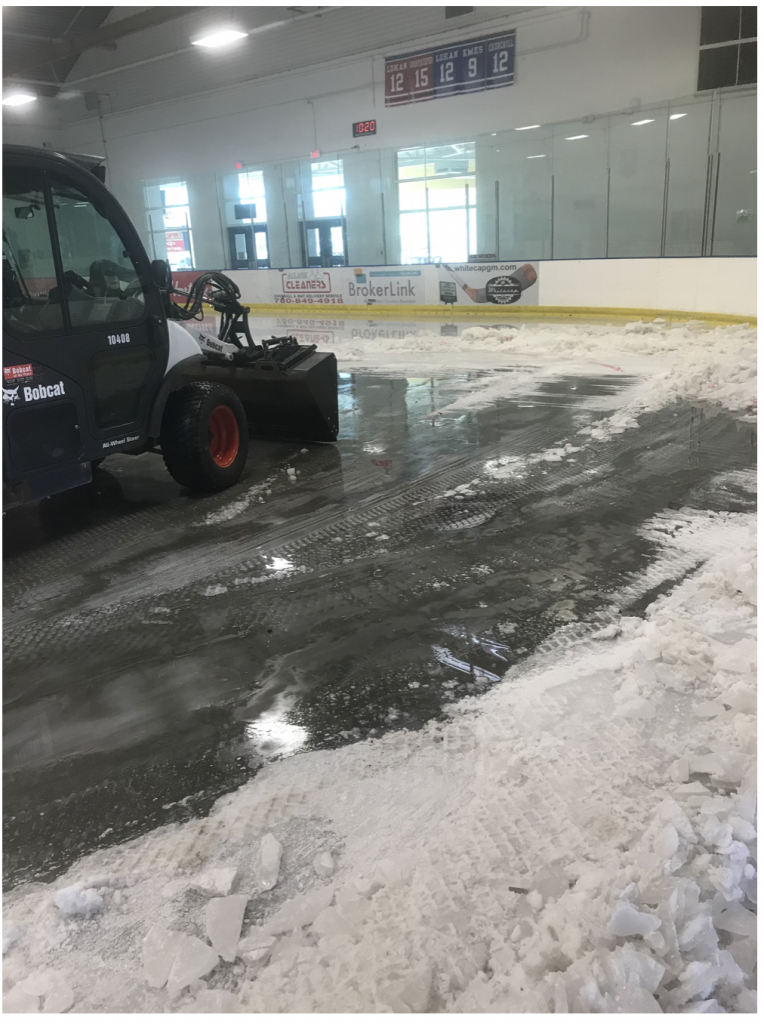 “That’s okay. The only problem is, with water that warm, you might get burn marks in the ice from the hose.”

“That’s not a problem. We’ve got a team who can keep the hose off the ice.”

The next text came just before noon:

“Wow can’t believe how shiny this realice is,” he wrote. 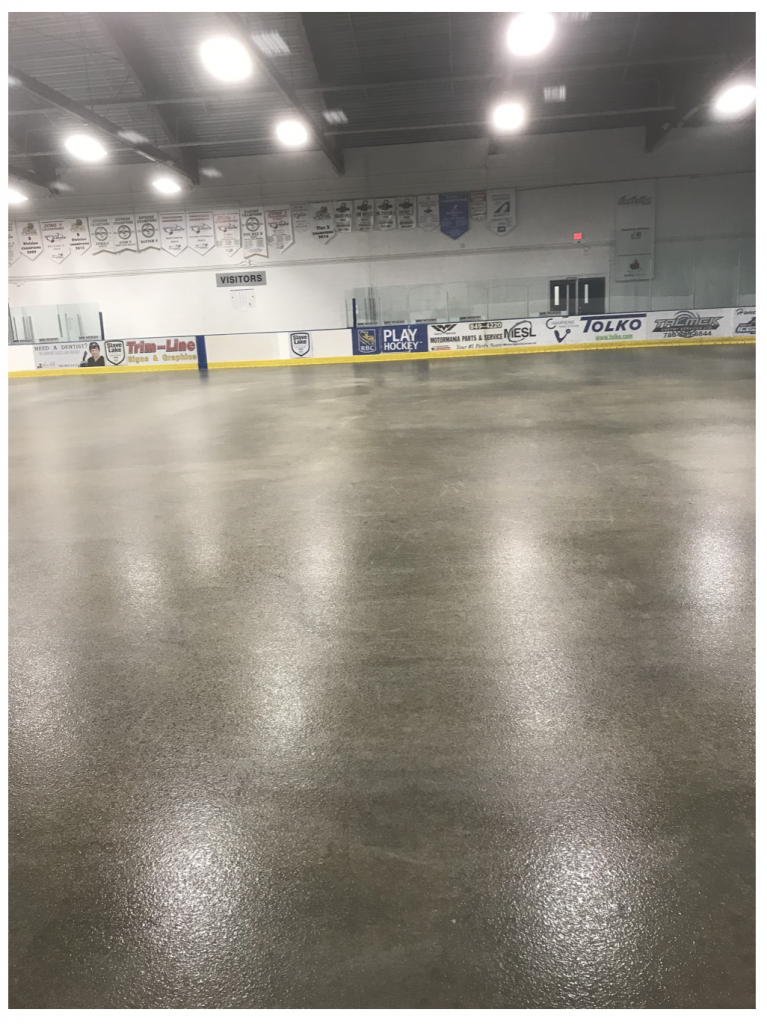 That afternoon, the white paint went down.

“The white ice seems even brighter than ever before.” 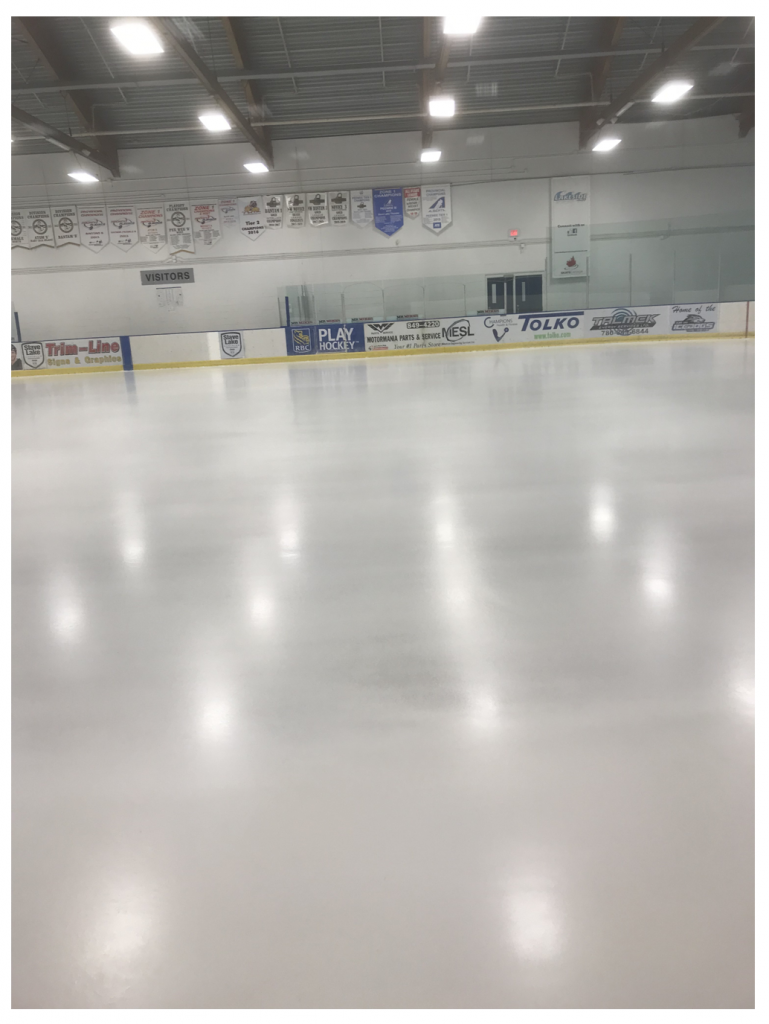 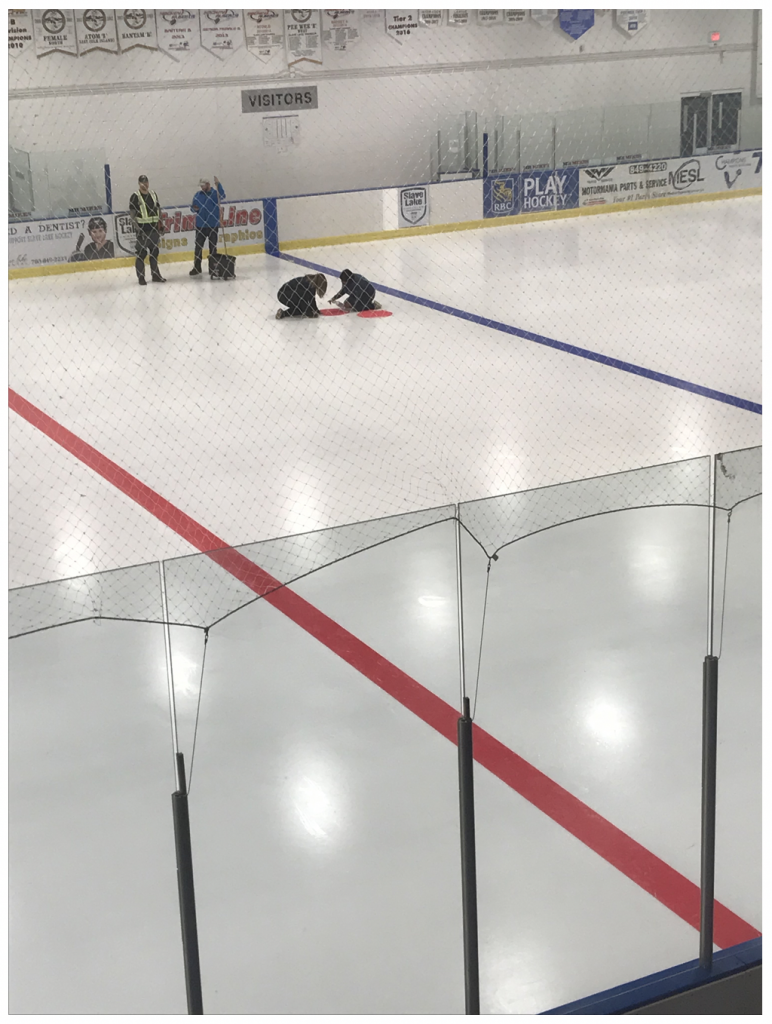 Day 4 – The bulk of the work was finished. 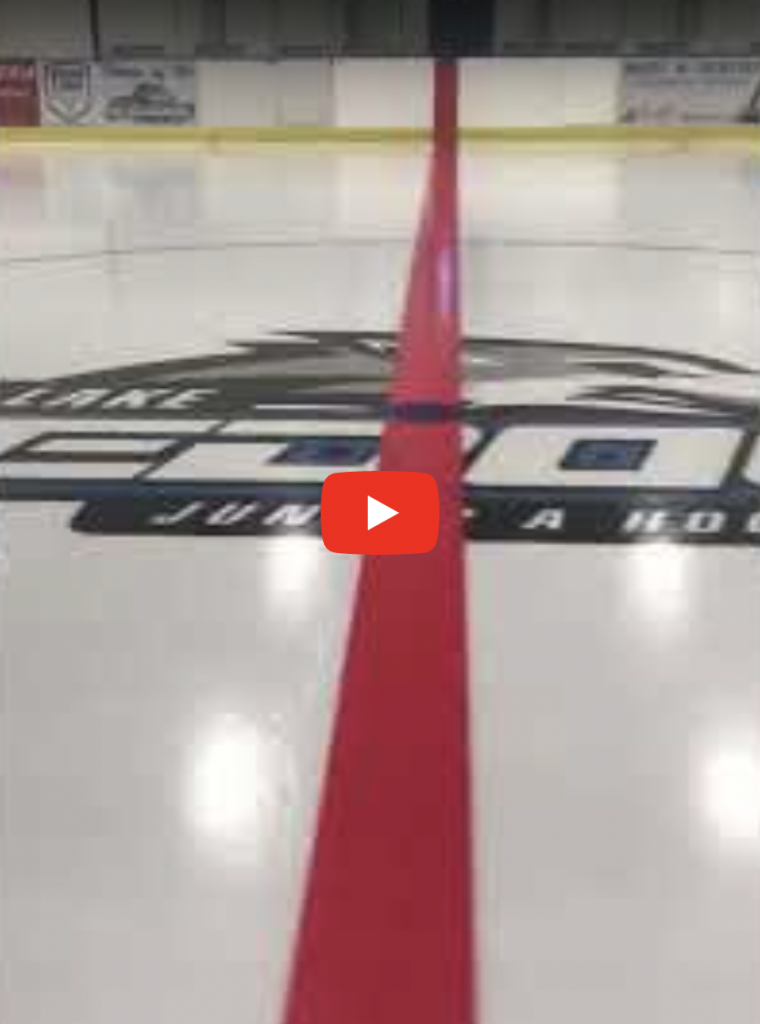 “I’ve just been told by the instructors that this is the best ice they’ve been on,” Wayne says. “Man, everybody’s talking about the ice now – people are coming to see it. It’s crazy here. Before I left the town, I was the supervisor then I retired and they called me back basically lead hand right now or better known as a supervisor. But after all the compliments on the great ice that we have now, I think I might be called the “ice god” LOL.” 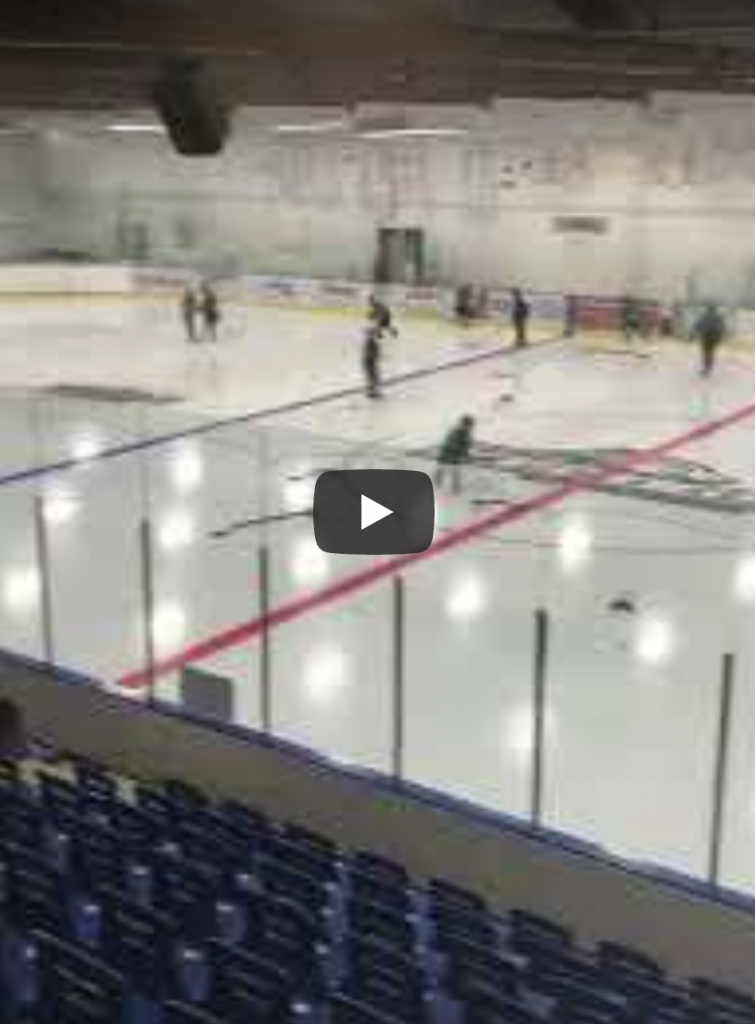 “They all came to me and said this is the ice of the ice… What did I do to it? ‘Phenomenal,’ they said. They skated hard and it looks like it’s just put it in again I’m so happy with the ice.”

And then Mayor Warman stopped in.

“He couldn’t believe that it was so nice looking,”

Run time – that’s down to 58 hours a week from 168. Wayne says the ice is barely creating any snow, either.

And that early morning dry shave we keep talking about?

“Doing that dry scrape in the morning before your first groups sure makes a difference on the ice.” 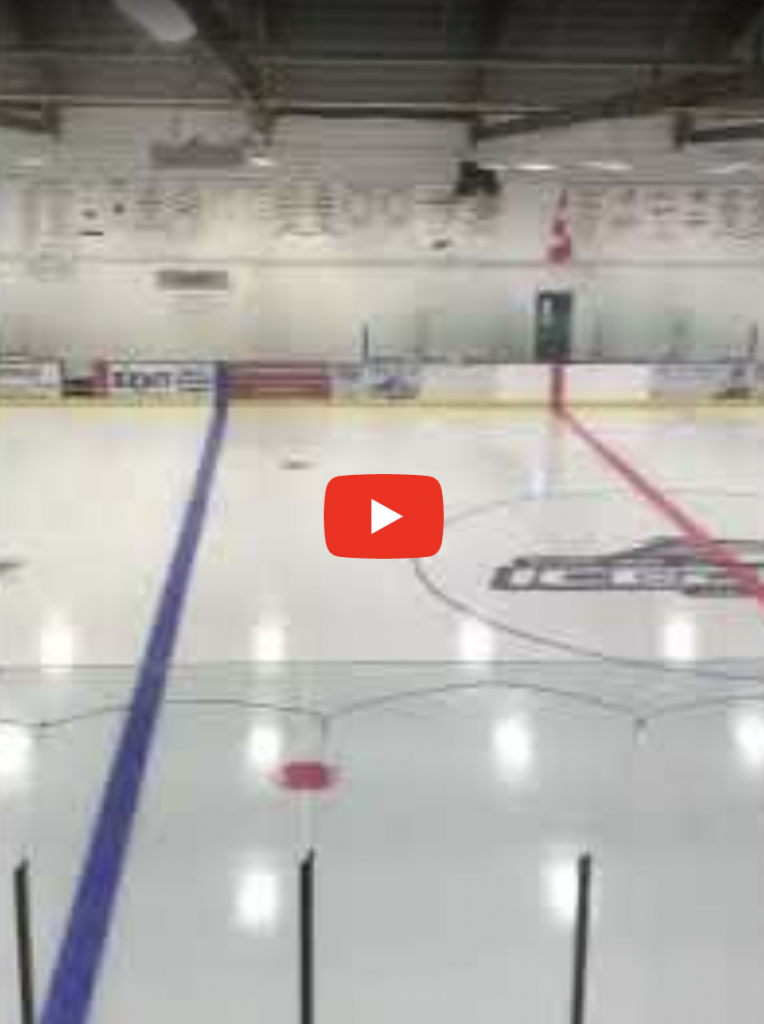 “I’m just totally amazed about this new ice. And like I said, I’ve been around for 35 years and this is the first I’ve ever seen anything of such beauty. I’ve always been in love with my ice, but now I’m in love with it even more.”

No Flash In The Pan

Two weeks later, the ice is still as beautiful as it was when it was rebuilt from scratch. This ice is no “flash in the pan”.