December 16, 2020 – The operations team at The Rinks at Exeter in Exeter, NH was the first to really push their ice temperatures higher. After installing REALice, they were able to run the ice at 27.5°F on one of their twin pads — and we’ve used them as an example of what you can achieve ever since. Now Phillips Exeter Academy, in the same community, has pushed the envelope even higher, with the ice temperatures on one of their twins at 28°F. As to ice quality, it’s great.

“They haven’t noticed a difference,” says Grounds Manager Jim Terenzio who explains the warmer ice temperatures come with the higher brine settings they’ve achieved since putting in their ice using the REALice system to treat their water.

Not only are they running their ice warmer at the renowned prep school, but the clarity of their ice has improved.

“The ice is really clear,” says Terenzio. “It’s so clear, it looks like the paint is jumping right out of the ice!”

Warren Biggins, the Manager of Sustainability and Natural Resources for Phillips Exeter Academy, says the REALice project dovetails nicely with the school’s vision for sustainability.

“It really hits the sweet spot of sustainability,” says Biggins. “Like LED lighting, there’s undeniably a financial case to be made via the energy savings. And using less energy is emitting less greenhouse gasses. Those factors, together with the incentives we received from Unitil, makes REALice a no-brainer!”

The expected energy savings (in a typical year) were calculated to be over 80,000 kWh of electricity each year. The incentives from Unitil, Phillips Exeter Academy’s electricity provider, covered 73% of the purchase price of the REALice system. 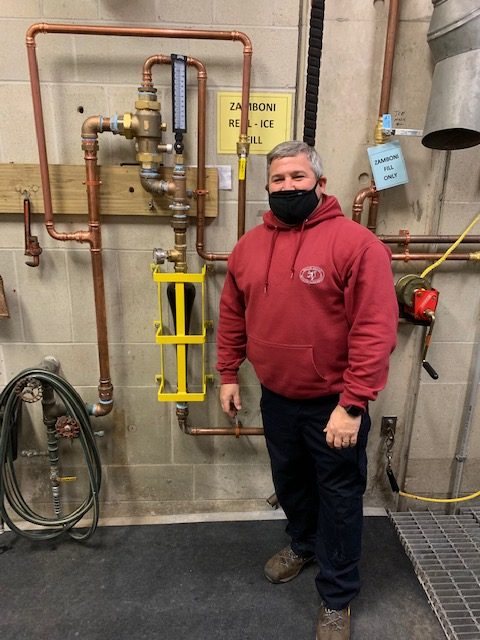 Jim Terenzio, Phillips Exeter Academy’s Grounds Manager in front of the REALice installation. A yellow cage was placed around the REALice wall unit to ensure it is protected at all times.

Putting the benefits of lower run times aside, what the Grounds Manager really likes is that so far this year, there haven’t been any complaints from the skaters about the quality of the ice.

“We’ve had no complaints, and that’s saying a lot,” Terenzio says. “In past years, if there is something to complain about, they will complain. So far, there hasn’t been one complaint. Imagine if we can eliminate that, our jobs will be so much easier!”

Instead of heating the water to high temperatures, REALice uses pressure to remove the micro air bubbles from the water to deliver great ice and energy savings. It’s an easy addition to an existing filling station, requiring 1-2 hours of a certified plumber or pipe fitter’s time, depending on requirements. REALice requires minimum static pressure of 45 PSI. It requires NO MAINTENANCE, no additional consumables like filters, membranes or chemicals and has an expected life of 15 years.

If you’re still flooding with hot water, you’re losing money. Watch what what these ice makers have to say about the REALice difference: lower run times, energy savings and, most importantly, ice quality — in 96 short seconds:

Located in Exeter, NH, Phillips Exeter Academy is one of the oldest secondary schools in the United States. It is a coeducational independent school for boarding and day students in grades 9 through 12, and offers hockey for both boys and girls at its twin pad arena, located in the Love Gymnasium.