Getting Rid of Slow Ice and Pushing the Ice Temps Up, Up, Up at Castleton University 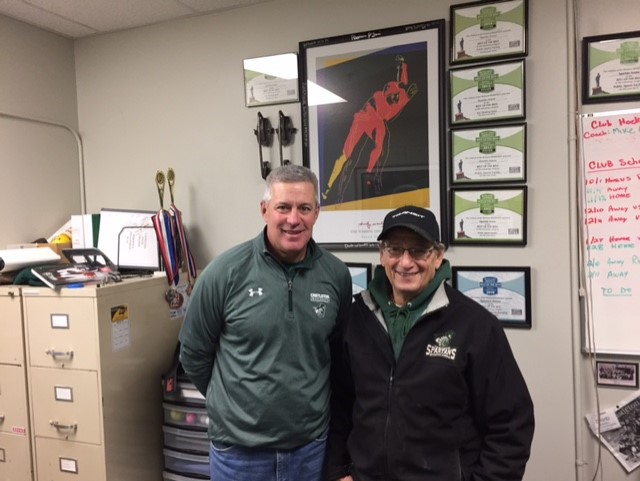 30 Mar Getting Rid of Slow Ice and Pushing the Ice Temps Up, Up, Up at Castleton University

David Manfredi and Steven Wolf are extremely proud of their ice at Castleton University’sSpartan Arena, but it hasn’t always been like this.  Well water, with an unusually high amount of calc, gave them ice they described as “gritty and slow”. Four seasons ago, when considering their options — which included reverse osmosis — Mandredi, the operations manager and a speed skating champion, flew out to Iowa State University to try out the ice there. At that time, Iowa State was the only arena in the USA where REALice was installed.

Manfredi liked what he felt.

Many things changed that year at Castleton, which has gone from being a College to a University. Spartan Arena, for example, added over 100 hours of fitness classes to its arena schedule, with a new bunch of users using a battery of exercise machines, opening the arena up 18 hours a day. And although their ice was better, it still wasn’t perfect. Building it with their REALice handheld unit gave them clear, good looking ice, but it started to look milky when the water from their ice resurfacer hit the ice.

Fast forward to last year’s season end. Wolf and Manfredi started wondering if the milkiness might be coming from their 11-year-old resurfacer’s tank. They opened it up to find it absolutely caked with that white, chalky calc – lime scale buildup. That buildup was being loosened up by the REALice-treated water going into their resurfacer tank, eventually causing it to slowly detach itself into the water being laid on the ice. The REALice system has an effect on limescale — transforming the calcite into Aragonite, which has a more rounded shape and, consequently, does not attach itself to other limescale crystals, pipes, tanks or nozzles.
Manfredi spent a few days cleaning it out, getting it ready for the season ahead. Now, with a clean, limescale-free tank, he was able to do something he’d never done before. He was finally able to use cold REALice-treated water for all of his floods — with no mixing of warmer water, with great results. Players noticed. They began to stop Manfredi and Wolf in the arena to tell them how good their ice is, telling them they now have the best ice anywhere.

Pushing the set point up, up, up

Being able to finally use the REALice system as advertised gave Manfredi and Wolf new confidence to start pushing their set point higher and higher and higher. And they had a good reason to push it to its limits. Typically, Spartan Arena’s ice comes out the second week of March and this year, the painters were coming as soon as their ice was out, so time was of the essence. Manfredi decided to see how warm he could keep the ice so it could be as close to melting as it could possibly be so taking the ice out would be a piece of cake.

He was amazed with what happened.

Using the “Covered” mode, he gradually moved the set point up, up, up. When it hit 29°F, it reset itself to 24°F, but now knowing that 29°F was the limit, he started moving it up again. He was able to move his set point up to 28° — and was still able to maintain good ice.

“I’m not sure I’d have the big boys on it at that temperature,” Manfredi says, “but for minor hockey and free skates, it’s perfect.”

Manfredi liked his experiment, and now has an idea of just how high he can go with his ice temperature next season.

“There were many factors but REALice continues to be one of our major contributors to our savings,” Wolf says. “As we continue to constantly tweek and learn more about REALice, we continue to experience additional gains each year.  It’s been hard to put an exact number on our savings because of changes in the facility but I would estimate a $10-15,000 per year savings in our electric and propane costs.”

Those savings come from no longer using any hot water to heat up their resurfacing water, and being able to increase their set point means a substantial reduction in run time on their compressors.

The Proof is in the Pudding

“REALice has helped us work through many issues to the positive,” Manfredi says. “The proof is in the pudding.”

REALice takes the place of needing to use extremely hot water for resurfacing by removing the micro air bubbles from the resurfacing water. The energy saved can mean a reduction in your natural gas and electricity bills by $1,500 to $3,000 per month – or even more depending on your particular configuration.

Without any additives, chemicals, wasted water or other energy sources necessary, the REALice system removes hot water from the ice resurfacing process. Those savings begin as soon as the system is installed and they continue, month after month, season after season.

As for your ice? It will be smooth, hard and clear — and your user groups will be impressed.

Your arenas may be eligible for an energy-saving incentive through your local utility, and we can help track that down for you.

Stop wasting money heating water to flood your ice. Let us show you just how much money you can be saving with REALice. Click here to get a free, no-obligation assessment for your facility.